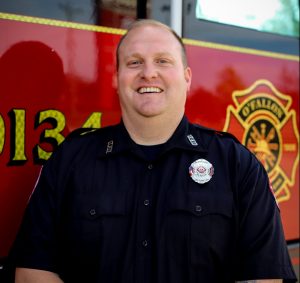 When Dave Lawton started in the fire service, he wanted to be a smokejumper, a specially trained firefighter who is the first to respond to remote wildfires. Then, he responded to a structure fire and found his true calling as a firefighter/paramedic.

Lawton became a part of the O’Fallon Fire Protection District (OFPD) in May 2022 when he was hired as a firefighter/paramedic after gaining more than a decade of experience at other rural and urban fire protection agencies.

While responding to fires is what called him to serve, it is meeting new people every shift and being able to help that has kept him in the fire service.

When asked about his most memorable response, he recalls the time his crew was called to a non-emergency situation. When the crew arrived at the community member’s home, they discovered that she was confined to her bed due to an injury. She had patiently waited for a new specialized bed to arrive for more than a year. When it was finally delivered, she had no way to assemble and install it.

“Once we had it installed and helped her move over, she burst into tears because she was so happy. She told us that even though it wasn’t a typical emergency for us, it was one to her, and she was so grateful for the help and support,” says Lawton.

Lawton is a 2012 graduate of the St. Louis County Fire Academy who holds an
Associate of Applied Science degree in fire science from the University of Montana: College of Technology. He is also a graduate of CBC High School in St. Louis.

When he is not on duty, Lawton runs a small leather works business focused on the fire service. You will see much of his custom handiwork at fire scenes holding firefighters’ radios and gear or on their helmets. He also enjoys spending time outdoors with his wife, young son and Golden Retriever, camping and duck hunting.