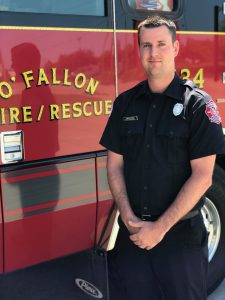 While firefighter/paramedic Kyle Chadwell might not have officially joined the O’Fallon Fire Protection District until May 2019, he says he’s had the opportunity to get to know the crew through ride-alongs and at various community outreach events before becoming an official member of the team.

“I’ve always felt very welcomed here,” Chadwell says. “From my first experience with OFPD, I really felt like I was already one of the guys and I knew it was where I wanted to spend my career.”

“I decided to become a firefighter/paramedic to help people in their time of need,” Chadwell says. “Every day you have the opportunity to make a positive impact on someone’s life, and those are the calls that really stand out to me.”

He calls one positive call in particular: “We arrived on scene to find a woman in labor, having contractions while sitting in the front seat of her car. Within a few minutes of being there, I delivered a healthy baby boy right there in the car. It was awesome to be involved in such an exciting moment in that family’s life.”

Chadwell admits he’s a bit of a thrill seeker — he even went skydiving on his 21st birthday — and says another aspect of the fire service he loves is that it changes every day.

“When you show up, you don’t know what you’re going to do that day,” he says. “Every rotation is different and no two calls are the same. It forces you to continue your education and train for any situation.”

When off duty, Chadwell enjoys spending time outdoors with family and friends. He and his wife, Meagan — who met in the sixth grade — live in O’Fallon with their two sons, Carson and Cole.