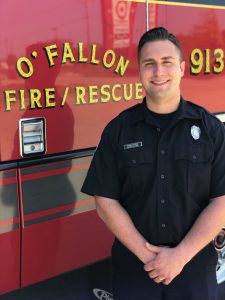 For Kenny Gales, his decision to become a career firefighter/paramedic came after a devastating family loss.

“My wife comes from a family of firefighters, so it was something that was kind of in the back of my mind,” he says. “Around that time, my niece was diagnosed with Stage 4 neuroblastoma, before passing away at age 3.

“My wife and I were spending a lot of time at the children’s hospital, and being in that atmosphere and seeing the dedication of the people working that, it made me realize I wanted to go into the medical field, and becoming a firefighter/paramedic seemed like the best choice for me.”

Since then, Gales says, the work has been truly gratifying, as well as genuinely interesting.

“No day is ever the same,” he says, recalling one particularly memorable incident when his crew was dispatched to put out a car fire at a gas station. “There were two Lamborghinis at the pump, when a van on the other side of the pump drove off with the gas nozzle still attached. The hose snapped and gas sprayed all over the Lamborghinis, causing them to ignite. Luckily, we were able to successfully extinguish the fire with no injuries.”

Gales joined the crew at O’Fallon Fire Protection District in May 2019. He says he was eager to work for a district that is prestigious, active in its community and known for treating its employees like family.

“This is a great opportunity for me to grow, to learn, and to be a part of an awesome culture and tradition,” he says.

When not at work, Gales enjoys traveling, exercising and spending time with his wife, their son and their Pomeranian, Yogi. He plays for the St. Louis Fire on Ice hockey team.