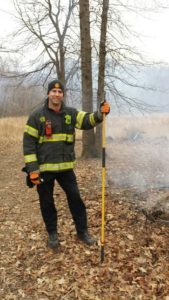 Firefighter Justin Tichy, who grew up in the O’Fallon area, never wanted to be stuck inside behind a desk.

“One thing I love about being a firefighter is that there is no ‘typical day’ — but that’s what makes this job so enjoyable,” he says. “We never know when we’re going to be called to help someone, so we have to be flexible. We’ve all had training, workouts and meals interrupted; but we have no problem squeezing in what we can or picking up where we left off.”

Tichy says he also loves the camaraderie that comes with being a firefighter.

“O’Fallon Fire has an outstanding reputation as a great place to work, and there’s definitely a family-like atmosphere that makes it fun to come to work.”

Tichy became a firefighter in 2012, and earned his paramedic certification in 2014. He has worked in Cape Girardeau, St. Charles County and Warren County. Tichy has additional training as a rescue boat operator, water rescue swimmer and confined-space rescuer.

Outside of work, Tichy enjoys spending time with his wife, Melissa, and their two young sons. He is an avid skier — he even spent a winter working as a lift operator in Breckenridge — and also enjoys golfing, hiking and tinkering with things in his garage.