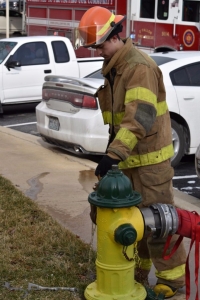 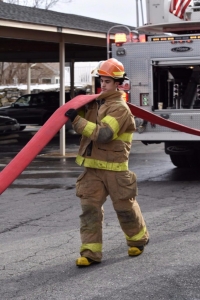 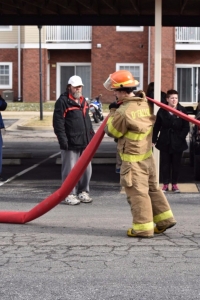 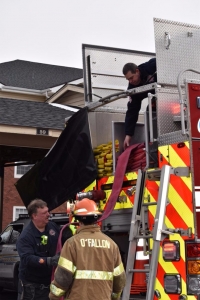 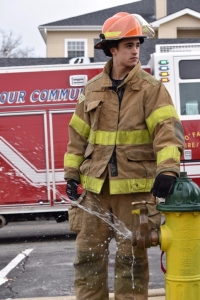 Have a high schooler who’s curious about the fire service?

Since the mid-1980s, O’Fallon Fire Protection District has offered a Junior Firefighter program, allowing young people interested in a career in the fire service to gain firsthand experience through monthly training around basic skills as well as opportunities to ride along with OFPD crews on the fire truck.

“Fundamentally, our program is designed to give members a chance to see if this is a career path they would like to pursue,” OFPD Firefighter/Paramedic Justin Tichy says. “We don’t necessarily train a defined set of skills. Instead, we stress the importance of teamwork and persistence, as well as building strong character within our members, while they gain first-hand experience in the fire service”

A number of OFPD’s current employees got their start in the Junior Firefighter program. Tichy estimates that at least nine program participants have become career firefighters in the District, with four rising to the rank of captain. Others have gone on to work for other local fire departments.

“We have a recent member who grew up always wanting to be a firefighter,” Tichy says. “He joined the Juniors when he turned 14 and was immediately hooked.”

Thanks to his mentors in the Junior Firefighter program, the member pushed himself to graduate from high school early and enter an EMT program.

“Because of the guidance he received through the program, he knew the exact path he needed to follow to be successful. He then went on to get his paramedic license and completed the St. Louis County Fire Academy all prior to his 20th birthday,” Tichy says, adding that the member now meets all the requirements to be an OFPD reserve firefighter and was recently hired as a full-time firefighter/paramedic in St. Louis County.

Tichy says that even those who ultimately decide to take their careers in a different direction can benefit from the program’s mentoring focus.

“Many of the skills they develop here can transfer well to any profession,” Tichy says. “Teamwork, critical thinking, and problem-solving. Also, firefighting is a very hands-on profession. I think most of our members would succeed in any skilled trade if they choose not to pursue Fire or EMS careers.”

OFPD’s Junior Firefighter program is open to all District residents ages 14-18 who maintain at least a 2.0 GPA in high school. OFPD employees’ children are also eligible. There is no cost to participate, but members must supply their own work pants, belt and boots. Members receive a full set of fire turnout gear to use while participating in the program, as well as an OFPD T-shirt and sweatshirt.

Any student interested in applying can pick up an application packet from the OFPD Administration building, located at 111 Laura K Drive, 2nd Floor, O’Fallon, Mo 63366.