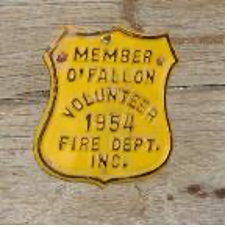 In 1954, the department’s financial needs extended beyond what the fundraisers provided, and the sale of “Fire Tags” became the primary source of income. Households and businesses could purchase a tag for $5 to guarantee the Department’s protection for the year. The problem with the tag system was that it was a voluntary support system. If the Department answered a call to a home or business that hadn’t purchased their fire tag, they would put out the fire and fine the property owner $100. 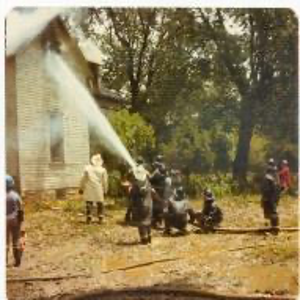 In the early 1950s, volunteer firefighters began taking classes at the Missouri University Fire and Rescue Training Institute (MUFRTI). Those who could attend taught the rest of the firefighters what they had learned. In 1960, the department held regular monthly training classes in first aid, respirator use, electrical fire hazards, gas emergencies, structural firefighting hazards, and took tours of target hazard complexes. On occasion, a structure was acquired to provide training exercises and controlled burns. 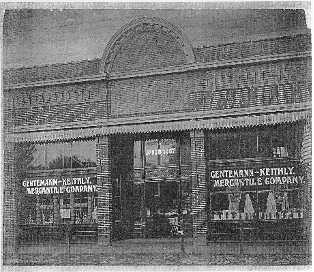 Quite possibly the most memorable fire O’Fallon has witnessed happened the night of Dec. 15, 1958, when Gentemann’s Mercantile on Main Street burned. The Gentemann’s Mercantile store was next door to the Bank of O’Fallon. Behind the bank, facing Elm Street, was the Glennon Obrecht family home. The youngest Obrecht child, whose bedroom was on the side of the house nearest the store, smelled smoke and woke their parents around 2:30 a.m. When a quick search of their own home turned up nothing, they sounded the alarm. 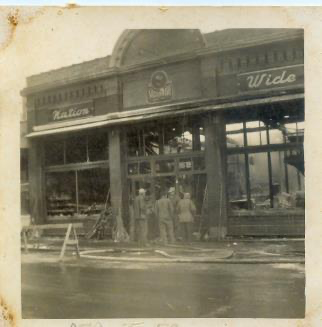 Flames lit up the night sky, and fire departments from Wentzville, St. Charles and St. Peters also answered the call. This was basically the beginning of a mutual aid system in St. Charles County, where emergency response organizations lend and receive assistance across district boundaries. Nearby businesses opened their doors to give firefighters a break from the bitter cold. Town and Country Café provided hot coffee to the volunteers, served by wives of the volunteer firefighters.

The fire was brought under control by about 7 a.m., but the store was a total loss valued between $75,000 and $100,000. The cause of the fire was never determined but believed to have started in a rear storeroom.

The Bank of O’Fallon, to the south, and O’Fallon Shoe Repair, to the north, sustained minor smoke and water damage. Bank records and assets were removed from the premises and put under guard while firefighters contained the fire. The fire department’s records, however, were lost in the fire.

In 1956, the City of O’Fallon celebrated its Centennial. The two-day event took place on August 5 and 6 commemorating the date Nicholas Krekel purchased the land on which he would build his home and take up his role as the founder of the City of O’Fallon. The celebration included a parade, festival and pageant. The proceeds were to be used to build Civic Club Hall and a new firehouse. Initially, the cost of the firehouse was estimated at $25,000, but the proceeds from donations and the celebration only amounted to $13,000. The Department’s 1961 financial statement shows that a loan was taken out with the Bank of O’Fallon for $12,000 to make up the difference. 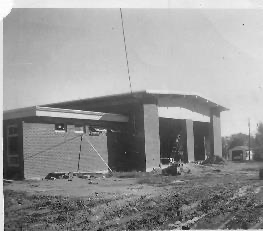 In April 1959, footings were poured for the new station. The volunteer firefighters came from various professions and trades, and their expertise was put to use in building the new firehouse. The building was completed in November of 1959 at the cost of $24,000. 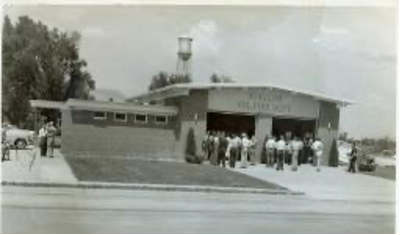 The new Station #1 on East Elm Street was dedicated on May 9, 1960. Approximately 350 people crowded into the new station, including firefighters from St. Louis County and nearby towns. 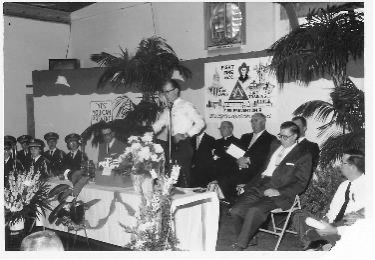 The Civic Club and the O’Fallon Volunteer Fire Department were connected by membership and a sense of civic responsibility. Minutes from Civic Club meetings during the 1940s reveal helping to retire some of the Department’s debt for a new fire truck.