The History of the O’Fallon Fire Protection District 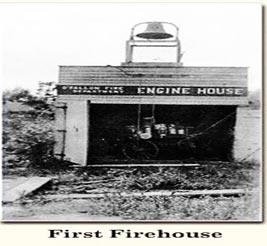 Behind the row of homes and businesses that lined Main Street was the Mill Pond. The Blacksmith’s shop was on the northwest corner of Main and West Elm and adjacent to that was Frank Goldkamp’s meat market. At the rear of the meat market was an icehouse where water from Mill Pond was used to freeze blocks of ice. Also behind the meat market and facing East Elm Street stood a modest little shed with a brass bell mounted on the top. No bigger than a single car garage, it housed a cart that held a chemical extinguisher and hose and was O’Fallon’s first Firehouse and the place where the O’Fallon Volunteer Fire Department began.

The water used for making ice was also used when fire broke out. When there was a fire, the first person to reach the bell alerted everyone within earshot.

Water was pumped from the Mill Pond and extended only as far as the amount of hose the fire department had on hand at that time, approximately a block and a half long. The hose was hauled on a large wheeled cart moved to the scene of a fire by horses that were kept “in a hollow” south of Assumption Church and east of the present day Knights of Columbus Hall.

O’Fallon’s firefighting strategy changed a bit with the purchase of a 1927 Chevrolet truck with a hard suction hose used for pumping from ponds and other water sources. It had a 250 gallon per minute pump mounted on the front and was purchased for just over $700. It was the first motorized pumper for the O’Fallon Volunteer Fire Department. The O’Fallon Fire Protection District is proud to still own this truck. It is kept at Station 4 where it is used for Public Relation events. It is a true survivor!

A white frame firehouse was built on West Elm, near the edge of the Mill Pond to house the new pumper. It had a single bay on the west side with an overhead garage door and an adjacent meeting room that was also used for City Hall and municipal hearings. 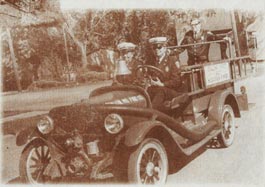 1941 Firehouse pic The fire department took over the brick building that stood next to the white frame firehouse. Later that year, a 1941 GMC Pumper was purchased for $4500.00. This firetruck remained in service through 1981. 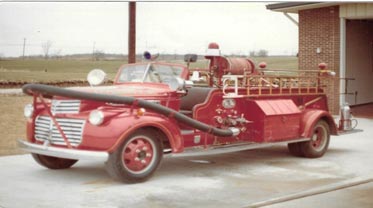 The fire department started selling fire tags as their primary source of income. For the bargain price of $5.00 each, households and businesses could purchase a tag that guaranteed them the department’s protection for the year. The first tags were made of metal and later tags were vinyl decals that were displayed on the side or rear door of a house. Area businesses sold the tags as a service to the firemen and people could also purchase them at the fire station. This remained as the primary source of income until 1970.

Footings were poured for the new Fire Station # 1 at 119 East Elm Street. This station was mostly built by the volunteers. Others with expertise in a variety of trades put their skills together and the building was completed in November 1959, at a cost of $24,000.

A 1960 fire truck was ordered from the Seagraves Company with two jump seats and 750 gallon water tank at a cost of $23,544. It was the talk of the town as everyone came by to see the new fire truck. The volunteer firefighters thought they were in “seventh heaven!” 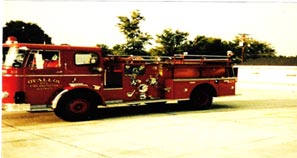 As the community grew, the sale of fire tags was not enough to fund fire protection. It was determined that a taxing agency was needed and in June the O’Fallon Fire Protection District was organized. The District remained staffed solely by volunteers for the next ten years. Fire Station #2 in St. Paul was opened in 1974. The 1941 GMC was moved to be first housed in a detached garage owned by James Emge on Hackmann Rd. to make room for a new 1974 Ford Tanker truck at Station 1, while the Vomund Feed Store was remodeled into the fire station. The station was rebuilt on the same lot in the early 1980’s which today is shared with the City of St. Paul and staffed by reserve firefighters.

With the continued community growth, the first full time fire chief and assistant fire marshal were hired in November 1980. During the era of the 1980’s, the District experienced phenomenal growth. A combination force of paid and reserve firefighters were organized. Three eight hour captains were hired in October 1987. An addition of living quarters was constructed at Station 1 to house 12 full time firefighters around the clock in October 1989. A 1988 E-One 80 foot aerial ladder truck was purchased and located at Station #1. Station #3 was built on Laura Hill Road on property donated by Frank Keeven. Phase One of Station #4 on Bryan Road was completed to include training and maintenance facilities.

Today, the O’Fallon Fire Protection District is a full service fire, rescue, emergency medical service, safety, prevention, and education organization. Its highly motivated and skilled staff serves a population of well over 85,000 people in an area of 67 square miles. This area includes most of the city limits of O’Fallon, Saint Paul, portions of Dardenne Prairie, Lake Saint Louis, and Saint Peters, as well as twenty square miles of unincorporated Saint Charles County.

The O’Fallon Fire Protection District is considered to be a progressive, innovative and proactive fire department and is considered a true “leader” in Missouri’s Fire Services. Fire District personnel hold offices and serve on numerous committees of national, state and regional organizations.