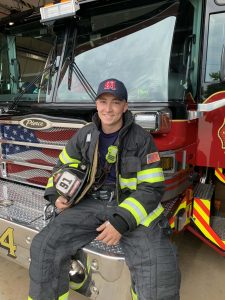 For firefighter/paramedic Chad Ham, being able to help someone in a moment of need is the greatest job satisfaction there is.

“I became a firefighter because I love the feeling of being able to help someone in their worst moment,” he says, specifically recalling a car wreck early in his career where he and his fellow crew members safely rescued someone who was panicking and in pain. “When someone feels so helpless and you are able to come and help them with any problem, that is truly rewarding.”

Chad, a U.S. Marine Corps veteran, who joined the O’Fallon Fire Protection District in February 2020, says he is also fueled by the heat and adrenaline rush of running into a burning building while everyone else is getting out.

He adds: “I chose to work for OFPD because I like what the department stands for and how much it goes above and beyond to help and be part of the community. OFPD has a good group of firefighters who love their jobs and work together very well.”

In his free time, he enjoys hunting, off-roading and working on cars. He and his younger brother are both first-generation firefighter/paramedics and enjoy bonding over their shared work experiences.