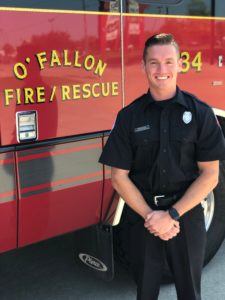 For longtime O’Fallon resident and Fort Zumwalt West graduate Alex Wetteroth, the decision to join the crew at O’Fallon Fire Protection District was a simple one.

“I love the people in O’Fallon,” he says. “I wanted to give back to the community that gave me everything growing up.”

Like many in the fire service, Wetteroth wanted a career where he could help others and make a difference in the community. Before joining the OFPD crew in May 2019, Wetteroth’s demonstrated his commitment to helping those in need by braving an ice storm and carrying a Stokes basket (stretcher) over a mile down the highway to rescue a pregnant woman who’d gone into labor while working at a neighboring district.